The last month or so has been insane. What with end of term, GCSE marking and report writing I haven’t had a moment. I have spent so long on the computer I actually have repetitive strain injury in my hand from constant mouse clicking. Yes that’s a thing! The only thing that helped was buying this brilliant ‘hand shake’ mouse,* which holds your hand in a different position. People laugh at me when I use it but I don’t care because it helps the grinding pain I was developing at the base of my index finger.

Since the marking started in early June the children have forgotten who I am, and Rob was not impressed by my hand made hastily folded piece of card and re-gifted chocolate I gave him to commemorate our 15th wedding anniversary.

Because the children have been starved of attention, they have been doing that thing which drives me mad. I call it ‘presenting the unsolvable problem to get their distracted mother’s attention’ syndrome. OH MY GOD it’s the most annoying thing ever. I’ll give you some examples.

Daughter, spreadeagled on the floor (which has hot water pipes running under it giving us unwanted underfloor heating) sweating in the scorching sun streaming across the room. ‘I am so HOT, Mummy. I feel sick. I feel dizzy, I feel like I’m going to faint like I did in that violin lesson when Miss C wouldn’t open the window.’ (Miss C is a very, very tiny music teacher who is always swathed in horsehair blankets even on the hottest day. Going into the room to collect Daughter after a lesson is like going in to a marshy swamp with a strong tweedy scented steam which which makes your eyes water.)

‘Have some water, darling’ I urge, squinting from the mark scheme back to the computer screen where some poor exam candidate has lost his head and written what seems to be a fairy tale rather than an informative letter.

‘I’ve HAD some water,’ she replies, ‘and it didn’t make ANY DIFFERENCE’

‘Well get off the floor and out of the sun.’

‘I’m too tired and sick to move.’ Daughter sighs and continues to lie there, flooded by the sun and resting on top of hot pipes.

‘The best thing is to have a shower, that’ll cool you right down.’

‘Hmm? Sorry?’ I reply. Clicking away, adding my ticks and comments to endless exam scripts.

‘Why do you want a shower?’

‘You TOLD me to have a shower because I am HOT and you told me it would HELP.’ Her tones of outrage break through my concentration.

‘But it would help, Darling. Go on, go and have a nice shower.’

‘I AM NOT going to have a shower because last time I had a shower it made me even HOTTER and I nearly FAINTED.’

Another example from my son the following day.

Despite it being Sunday morning and my first lie in for 22 days, Son bursts into our bedroom, waking me up at 7am.

‘Well make yourself some breakfast – you’re 12 now,’ I mutter, keeping my eyes closed hoping I can will myself back to sleep.

‘But there’s NOTHING TO EAT IN THE WHOLE HOUSE!’ he continues, jumping on the bed and experimenting to see if he can levitate his body up and down without using his arms and legs, just a curiously effective caterpillar movement.

I keep my eyes closed, trying to stay asleep as the bed rocks around like a ship lost in a stormy sea.

‘I hate toast. You know I hate toast. I had to have it all the time at snack time in Reception as the biscuits had egg in and…’

‘There’s only Alpen and I HATE Alpen.’ More bouncing for emphasis.

‘YOU CHOSE the Alpen when we went shopping,’ I respond, my eyes now snapping open with crossness. ‘You said you had it at Grandad’s and loved it and that we never had anything nice in the house and why couldn’t we have nice things like Grandad’s Alpen?’

‘Yoghurt? With honey?’ I say hopefully, remembering we have a full carton of lovely, healthy unsweetened Greek Yoghurt, especially bought to give the children a good-for-you choice at breakfast time. (Got to be better then the two mini pork pies which Daughter managed to snaffle for breakfast the day before).

‘Because I’ve just brushed my teeth.’

So I’ve ignored my children to such an extent they have had to resort to fiendish schemes to get me to focus on them, even if it is with irritation – they must have concluded that was better than nothing. Oh dear!

I have done some nice things though. I had initially told Daughter she couldn’t go to the ‘best party of the year’ which was taking place in a POOL in someone’s garden and EVERYONE was going. Rob was at work and I had a fully packed end of term Leavers’ events to run. I told her she would have to stay at home with grandma. Party was out of the question as Grandma can’t drive. But I was a good Mummy as I said yes when I wonderful mum of Daughter’s friend offered to pick up Daughter, take her to the party and keep her for a sleepover when I was wrestling with the horrors of the last day of term. I think she even offered to get a present for the party girl on my behalf (forging my and Daughter’s signature) and I nearly said yes.

Also I was good because I said yes to Son having a ‘small party in the garden, just chilling with some boys and girls from school, maybe a bit of music’. I have slightly regretted saying yes as it seems I have agreed to 25 (TWENTY FIVE!) 11 and 12 year olds coming to the house next week.

Finally, my best good Mummy deed of the week, which possibly rivals the ‘staying up until 2am to make bloody rainbow cake to keep Daughter happy‘ deed was detangling this BLOODY Einstein’s Cradle thing. 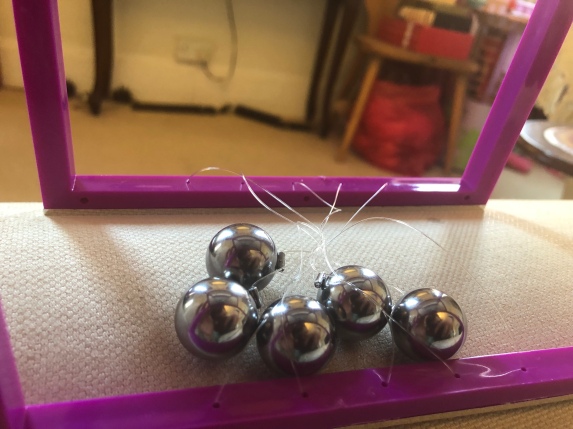 It took FOUR episode of ‘Westworld’ to get this untangled. Strangely, it would seem that the urgency that I untangle it ‘RIGHT NOW, Mummy’, wasn’t quite warranted as they haven’t touched it since I untangled the damn thing.

But at least the summer holidays have now begun for all of us, except poor Rob, so I am going to work really hard on being the best Mum ever. Son turns 13 in September so I reckon I have to stop thinking ‘I’ll get round to being a good parent next month,’ as I am rapidly running out of time. 13 is getting old, and I think your personality is pretty much set by then. I have the next six weeks to turn it around and stuff his head with glorious #soblessed memories of his golden childhood.

I am conscious that on this glorious sunny day I am in bed writing this blog with Daughter next to me watching Netflix while Son is downstairs play Fortnite but the Mummy fun is going to begin ANY MINUTE! So I’d better get on with it. I’ll let you know how I get on.

Leave a Reply to A. JoAnn Cancel reply