It’s 33 degrees. In front of me glitters Lake Como with the mountains behind stretching away through the clouds and up to a powder blue sky. I have bites on every limb despite having three mosquito repelling pads attached to my clothes, a plug in repellent, and a hefty application of Deet. I am in a wet swimming costume with my hair in twisted, chlorine scented knots – Daughter is already telling me she is bored – but I am VERY HAPPY.

I think near death experiences do that for you. Yesterday we crossed from Switzerland into Italy and I have never seen hair pin bends like it. Thank God Rob was driving.

It all started so well. We packed the car to the gunnels with everything we could think of, shoved children in the back, squeezed Mother-In-Law in between them and off we went.

We were driving to a little complex in Italy just on the other side of the Swiss mountains. The total journey would take about 12 to 14 hours so we decided to stop at Riquewihr, in the Alsace region of France, for a couple of days.

Le Shuttle did its thing and before we knew it we were in France! The sun was shining and the road rose up in front of us. Within 20 minutes we were all bored stiff. We had eaten our lunch sandwiches (it was 9.20 am) and all the crisps, chocolate, and biscuits were gone. Nobody wanted the fruit. In order to pass the time Daughter suggested a game of Plop Trumps.

Daughter is obsessed with Plop Trumps, a card game based on the poop produced by various animals. Poop is rated on qualities such as frequency, hardness, length, smelliness, and yuck factor. I learned rather more about the pooping habits of animals that I would like, or ever need. For example, did you know Inuits eat reindeer poop when they run out of food? Or that a wombat poop is the exact same shape as a freshly baked loaf of bread? All very interesting, but it started to become less interesting after three hours and a billion rounds of the game.

Although my children are 12 and 10 I still can’t help myself from yelling, ‘ooh! Look at that windmill!’ or ‘see those donkeys!’ This backfired when I saw some lovely French caramel and cream coloured cows. ‘Look at the cows…’ I started before hastily changing it to, ‘wooaah! DON’T LOOK AT THE COWS, DON’T LOOK AT THE COWS’ as one picturesque specimen clambered onto another and started humping it with enthusiasm.

Riquewihr is STUNNING. A beautiful old village which thankfully escaped any damage during WWII so its medieval beauty is mostly preserved. All around the town vineyards stretch up the sides of the surrounding hills. It was scorchingly hot. In the middle of the night Son was driven mad by the heat so went down to the kitchen, filled two plastic carrier bags with cold water and strapped them to his feet. We only realised what he had done after following the little puddles of water which led to his room. 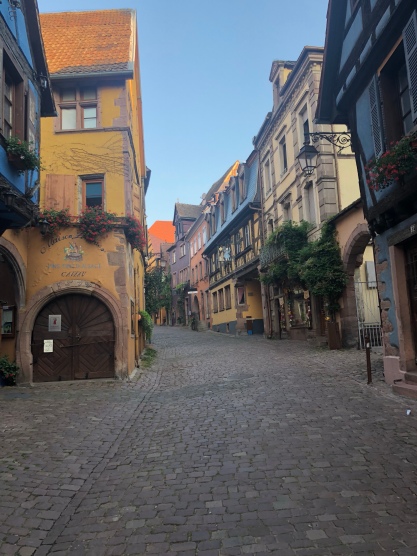 For some reason Rob and I woke up on the first day at 6.30am. Driven by the need for some cool fresh air (Rob) and an urgent desire for croissants (me), we crept out of the house  leaving M-I-L and children peacefully sleeping – and went in search of a boulangerie.

NOT ONE WAS OPEN! WHAT IS GOING ON? IS THIS EVEN FRANCE!?

None of them opened until 9. This has never happened to me before. In France, they ALWAYS have bakeries open early – I know this as I have learned you have to get to them first thing as all the croissants and pan au chocolats sell out by 8am.

So no lovely carbs for me; on the plus side I think it’s the most romantic half an hour I’ve spent with Rob in about ten years. We wandered, hand in hand, through the beautiful town with not a soul to be seen (in particular no children, especially not ours) not talking much but enjoying the moment and the cool, fresh, morning air. Lovely. I had to savour this moment and would remember it later when I was directing Rob across a mountain pass and he slightly lost his temper. It was only the memory of this quiet moment that stopped me opening the car door and chucking him out of it.

On long journeys Rob and I have a tried and tested formula that ensures we arrive safely. I direct, he drives. This is because if I drive and he directs, he will spend so much time criticising my driving he gets distracted and loses where we are so I end up going the wrong way down a foreign motorway with Rob yelling at me.

As I can do more than one thing at a time, and tend to stay calm, it makes more sense for me to direct. I then tend to drive when we get there as it doesn’t bother me if I don’t drink when we go out.

This usually works well. Not so much this time. There was a point, just before getting to the Swiss border when we nearly turned back and went home. It was all Rob’s fault (as far as I am concerned, he may beg to differ). I always use the Google Map directions on my phone. It’s up to date and usually clear. Rob wants me to use Google Maps but with the backup of the car’s built in sat nav. I don’t like the car one as it’s old and there are whole swathes of roads and junctions which the sat nav doesn’t recognise as they were built after the sat nav was made. Infuriatingly, there doesn’t seem to be a way to update it.

A perfect storm was created as we approached a complicated junction. For a terrifying ten minutes the car sat nav had no idea where we were and the green line just vibrated uselessly across an empty space. Over the car’s speakers the robot sat nave voice intoned with increasing desperation, ‘take the next exit, take the next exit.’ There was no exit. My Google Maps also got confused and started saying ‘turn around when possible, turn around when possible.’ The clash of robot voices was so bad the children had their hands over their ears.

‘Which way? WHICH WAY?’ Rob yelled over the cacophony.

‘I don’t know!’ I replied, frenetically zooming in and out on my phone screen trying to work out where the hell we were.

‘There is no fucking exit!’ howled Rob. ‘Turn her off!’

‘She’s off!’ I screamed, jabbing at the buttons. ‘What the hell? Why is she still talking?’

The car careened around a bit, crossing what felt like fifty lanes. Road signs flashed past me: Paris, Zurich, London, Perth, Abu Dhabi… (I may have imagined the last lot…)

‘That way!’ I shouted, stabbing my finger over to the right and nearly blinding Rob.

‘Christ!’ he shouted, wrenching the wheel over.

We finally found the right exit and travelled in silence for the next hour.

Jesus Christ I have never been so terrified. Hair pin bend followed hair pin bend. Both going up and going down. NOW I understood why the sat nav was saying it would take two and a half hours to travel thirty miles. Not only was the road terrifyingly narrow with cliff drops going down thousands of metres, the road was filled with insane drivers whose middle names were ‘tailgating arseholes’. Not forgetting the cyclists who considered it a personal challenge to overtake every car they could see JUST as they went around a sharp bend.

I was constantly amazed at how fit those cyclists must be until I saw one poor old chap cycling uphill as hard as he could but slowly, ever so slowly, rolling backwards. Ha! 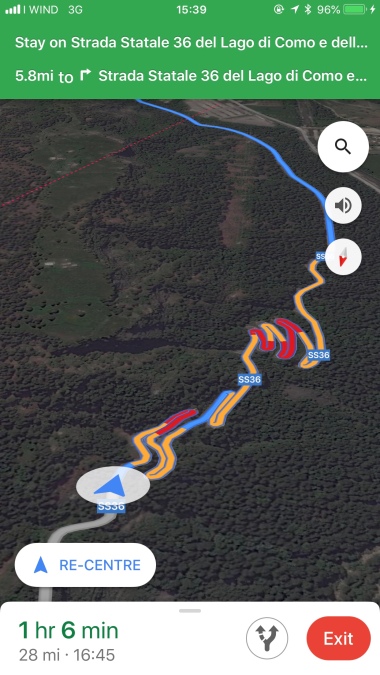 The map pictures here don’t do it justice as what it doesn’t show is the dizzying drops. Rob drove with grim concentration. All was silent in the back. That was until Daughter decided she wanted to know EXACTLY how long there was left. She asked every three and a half minutes on the dot. It was like she had a fricking timer back there.

Drops of sweat beaded Rob’s brow. I was starting to feel a bit sick. I had to stop looking at the view as it swung towards me then away again with a vertiginous swoop. The car’s wheels actually started to squeal as it went round the bends. Even though we were only doing about ten miles per hour. That’s when I closed my eyes altogether.

Finally, finally, I heard Rob breathe a sigh of relief and we were down the other side and on a straight road. The tension was broken when the sat nav informed us, in a ridiculous voice, that we must ‘continue straight to stay on Strada Statale 35 del Lago di Como e delio Spluga’. I wish I recorded it as she sounded like she was gargling.

The house we booked was lovely, the sun was shining, the children jumped straight into the pool (Daughter had been wearing her swimming costume since she got up that morning) and all was right with the world. I felt like kissing the ground when I got out of the car, like the pope.

I have two things I wanted to share with you. The first a poster about being a woman which I wished I bought to put on my wall. And my favourite newspaper headline of the week.

12 thoughts on “Travels with my Family: What was I Thinking?”

Husband made the best meal Sunday night - his signature chicken fajitas followed by home made apricot tartin served with fresh cream. Absolutely delicious 😋
Could this be the best birthday present ever? 🤔
Son went out last night and bought him and his father giant steaks for dinner. Having a growing up son has its advantages! He even made his own burger sauce 😋 I don’t know how they can eat it that bloody though 🥴
Very excited I’ve been asked to join the Broadstairs Pop-Up Bookshop at the end of February. 27 Albion Street Broadstairs Do come along if you’re around! #broadstairs #bookshop #beach #books #writingcommunity #visitkent #kent #writersofinstagram @chris_horn_author thanks to Chris for organising #thepopupbookshop
Happy happy birthday to my gorgeous mum who is 80 today! 🎉🎉🎉