Poor Dog. She’s not having a great summer. On the one hand she loves having the whole family around and going on lots of walks in the sunshine out in the countryside – but on the other hand it is SO HOT!

Dog has spent the last two weeks under the Willow Tree in the Sploot position. I love that this is an actual thing. Look here if you don’t believe me! She manages to completely flatten herself so she looks like a large, slightly muddy, sheepskin rug. The only sign she is still alive is her usual big huffing sigh and the odd expressive twitch of her eyebrows.

It hasn’t helped that I forgot to book her in for a clipping so her coat is MASSIVE. 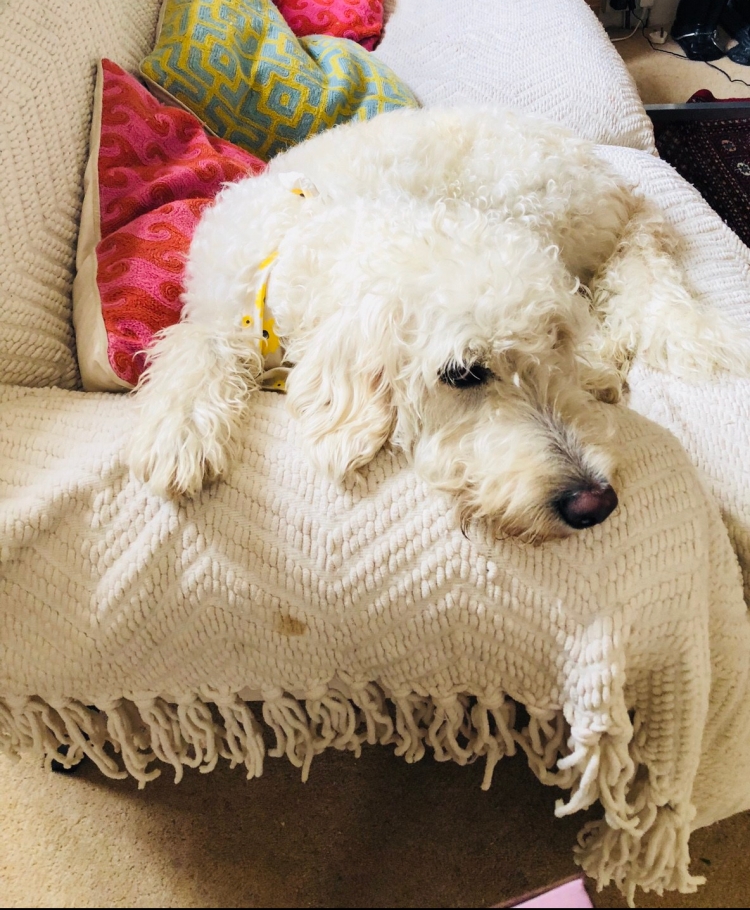 Look at her – boiling hot day and wearing a thick, long fur coat. (Excuse the stain on the throw, Daughter dropped something on it, she can’t remember what, it might have been her latest batch of slime, or a pizza slice. She also can’t remember why she didn’t sponge it off straight away – or tell me)

The holidays finally started and off went Dog to get clipped. She looked so much happier without her thick fleece. The sun has continued to shine, so Dog spends most of her time out in the garden. We are finding increasingly difficult to get her back into the house. This is because she suspects (usually correctly) that when we are trying to get her into the house it’s because we are going somewhere fun without her, so she won’t come in. 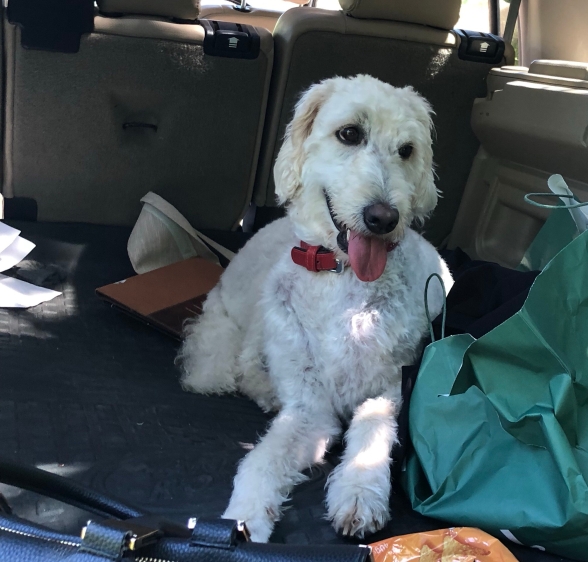 Because of this FOMO (which apparently is the way young people write ‘fear of missing out’), whenever Dog sees the back of the car being loaded up she promptly gets into it, making sure we don’t leave without her. Look at that faux innocent expression – she is also sitting on my dry cleaning.

Another way Dog deals with the heat is by annexing the paddling pool. She bloody loves them. She’s got this thing of jumping in and then slapping the water with her paw and catching it in her mouth. She is constantly amazed by this and will do it over and over again until either we get her out, or she bursts the pool – whichever comes first.

This video shows the first time Dog came across a paddling pool as a pupper. I blew it up for the children when we went to Devon. The sun had shone for weeks and weeks so we packed no jumpers or coats. The sky was blue the heat was wonderful and it looked set to last for another few weeks. That is, until I put up the paddling pool. This was Day 1 of 14. The day after I put up the pool it rained. Every. Single. Day. The entire two weeks of our holiday. And no, not just a drizzle, a proper downpour.

Day 1 of the holiday in Devon: Dog and Pool

And then DISASTER STRUCK!

The best thing about where we live is the lovely countryside walks right on our doorstep. Here is dog happily returning from a walk. 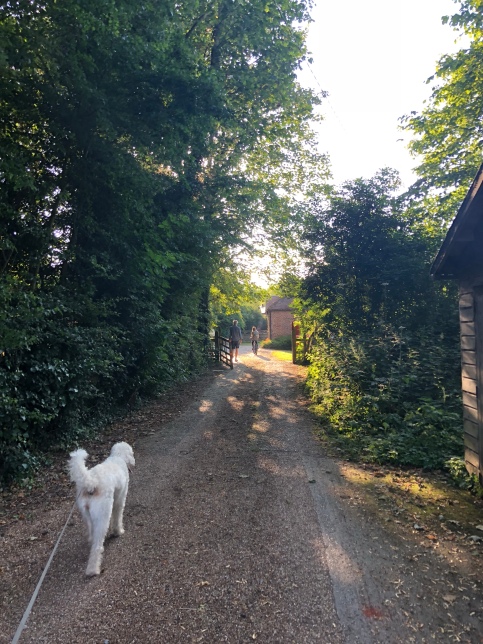 But what I didn’t know is the evil of grass seeds. Turns out these are very bad for dogs. It seems astonishing that such a tiny little object can cause so much devastation.

After a walk we noticed Dog kept licking her paw. Quite a lot. I had a look but couldn’t see anything. Hmm, I thought. I didn’t like the look of how much she was licking it. She continued to lick it the next day. Daughter insisted on trying to take a close up photo of her paw to see what was going on. Whenever we came near her paw Dog would try to distract us by licking our hands, faces and arms so it proved very difficult to get a good look. After about a million failed photos Daughter got this one. 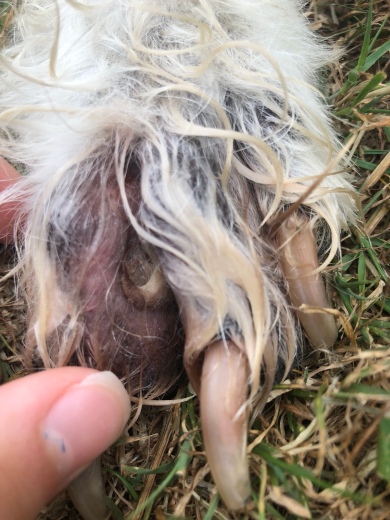 I was still no wiser. But it looked different to her other paw so a trip to the vet was in order. Result: Grass Seed and operation!!

Apparently these little grass seeds can get in between toes or into ears and eyes before burrowing their way in causing nasty infections. With a serious face the vet told me the procedure could cost as much as…

That was the most it would cost depending on Dog’s reaction to the anaesthetic. Thank Goodness for pet insurance.

We left her shaking, with her tail rammed between her legs. It was heartbreaking and we heard her howling like a mournful wolf as we closed the door.

Thankfully, all went well and the call came to say Dog was ready to be collected. We brought her home and unbelievably I remembered where her dog cone was from last time, so I saved myself having to buy another. Dog went into panic mode when I tried to tie it on – she did not enjoy wearing it before.

So we are back to the pad pad bonk sounds as Dog adjusts to wearing the giant cone. She is a bit better this morning but feels VERY sorry for herself. I asked Son to send me some cute pictures of Dog for this post. Here’s what he sent. 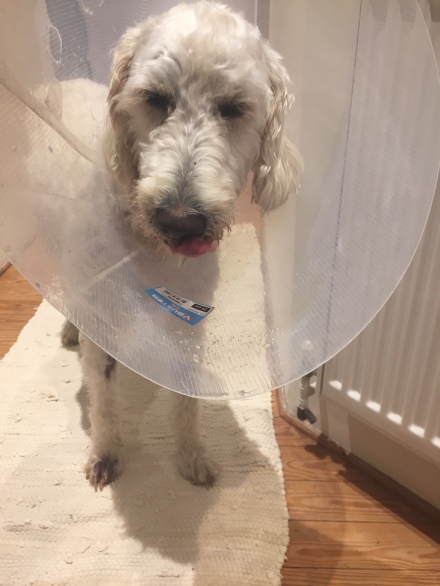 So he tried again… 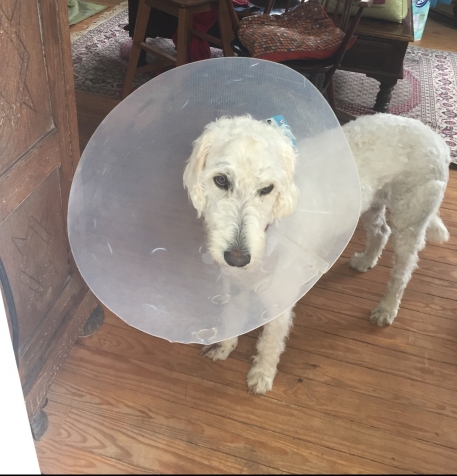 Still too sad! I replied

He moaned a bit but finally sent me another one… 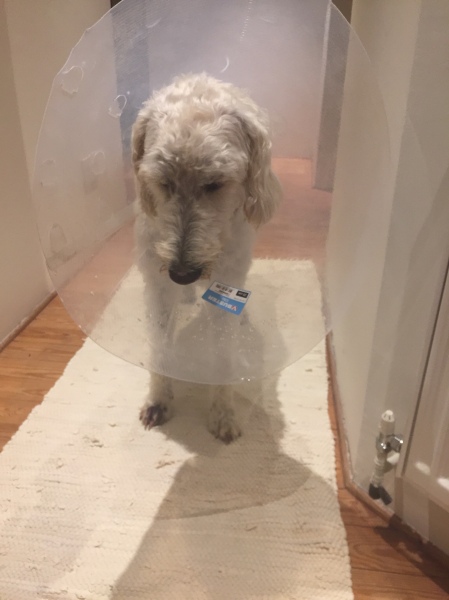 ‘I think that’s the best you are going to get,’ texts Son in response.

Oh dear, poor Dog. And poor me as I’ve been given a whole bag of tablets to give to Dog over the next week to stave off infection and inflammation. Dog does NOT like taking tablets. I’ve managed to get one half down her by wrapping it in ham, but the quarter tablet was discovered and spat out onto the cone. I had to pick it out, prise open her jaws and chuck it down her throat. It seemed to go OK but I just heard a coughing/retching noise and the sound of something pinging onto the floorboards so I suspect it’s come back out again.

So a sad house today. AND it’s started to rain a bit. I know, I know, good for the garden – but I hope the sun comes back soon.

Meanwhile, here is my favourite video of Dog in happier times.

17 thoughts on “A Hot Dog and Another Cone”